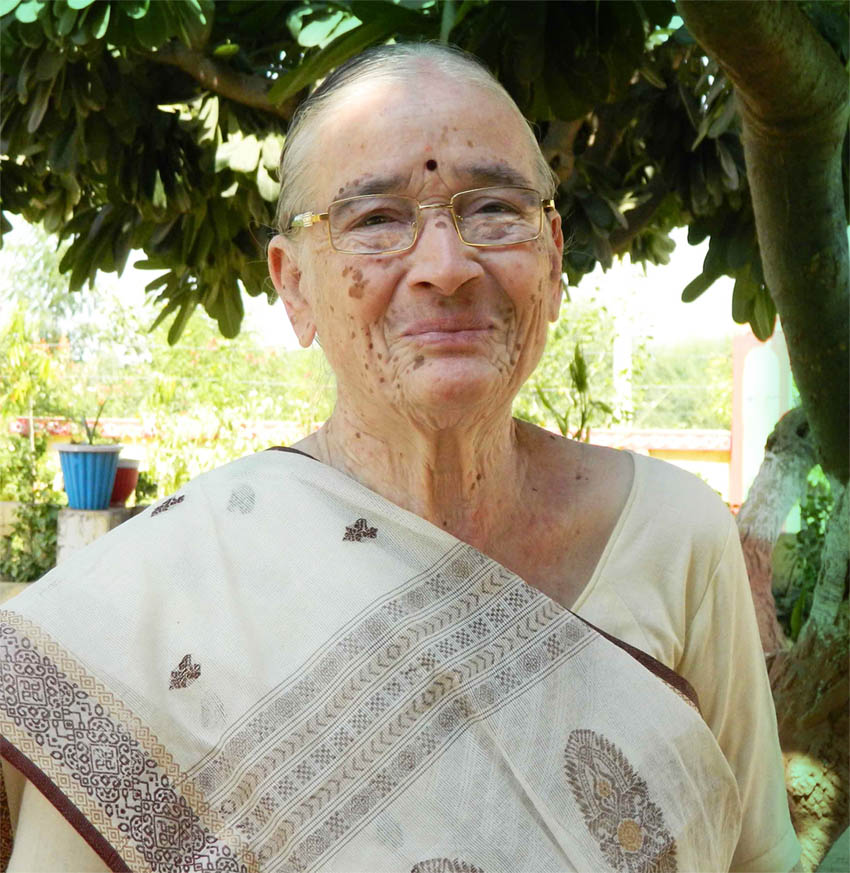 Impressed and influenced by the ideals of Mahatma Gandhi, Vinobaji & Sri Aurobindo Sri Ramilaben Gandhi decided in her young age to tread on this thorny and untrodden path. A barren & deserted place on the outskirts of Ganeshpura Village has become her work-place. After 40 years of Struggle, Sadhana and Service this perilous place has been transformed in to paradise in the form of Yoganjali.

A Brief Introduction of Ramilaben Gandhi

Ramilaben was born in an eminent family of Patan on 24 November 1935 and completed her graduation in Arts.

Thereafter, However instead of leading a peaceful married life like other girls her age, she chose to dedicate her life for the welfare of society.

Ideals of Vinobaji inspired her to participate in Bhudan Yatra in Gujarat & this experience cemented her aim at working for the rural people through education field.

To support the family she started serving in Patan Municipality for a year as a typist & then in B.D. High school Patan from 1957 to 1965 as a teacher.

At the age of 30 years , she founded Sarva Mangalam Ashram at Sagodiya 8 kilometres away from Patan & inspired poor village children to get education.

A turning point came in her life & She left Sarva Mangalm Ashram & circumstanced encouraged & inspired her to found Yoganjali Ashram at Ganeshpura, in 1974.

There was only one school in Sidhpur then.

A lonely place, a sheltering place for drunkards and gamblers a place where people dared not to go there even during day time. Such a perilous place has now been transformed in to a centre of education ,an ideal place for spiritual progress, a hostel for the backward class students a primary school & a high school with Yoga Mandir , a community centre, a hall for cultural activities, Rural industries, legal aid centre for women a sheltering home for discarded women of the society.

Glimpses of Her Various Activities

Established school for economically backward student of village area. Children from about 42 nearby villages study here and receive quality education without any discrimination on the basis of caste, class or religion. A total of about 2900 boys and 1000 girls have studied in this school. At present, 600 students are studying.

In the periphery of Ganeshpura, ponds have been dug in five villages & repaired roads for better transportation with the cooperation of the students & village people.

During the devastation in north Gujarat because of heavy rain fall 500 huts have been made in various village for the flood affected people with the financial cooperation of the Sadvichar Parivar ,Ahmedabad.

Under the Food for work scheme with the help of Sadvichar Parivar,Ahmedabad she worked in North Gujarat & recharged dry wells, dug old ponds, repaired them for irrigation work & distributed grocery and food grains.

Developed Harijan colony for the untouchable people at Kholwada village near siddhpur.

Constructed 124 Houses for the refuges of the troubled villages of North Gujarat.

Organised Eye camps every years from 1979 to 1984 and 650 operations had been done for cataract. The same history repeated in 2006 & examined 256 yes patients & 400 spectacles had been distributed to the deserving people.

Even at the age of 81year, she is active in all the activities pertaining to the upliftment of rural children and women.

Designation in other institution